Rowena Spencer passed away at age 91 on Tuesday, May 13th. She will be remembered by generations of New Orleanians for her surgical skills, her commitment to various causes, her eccentricities, and most of all her dedication to the young patients she saved. She was a faculty member in the Department of Surgery (and later Pediatrics) from 1952 until about 1969.

This articleÂ appeared on NOLA.com this afternoon.

Retired faculty member Rowena Spencer is back in the American Medical Student Association blog, On Call, on the occasion of her 91st birthday which will be July 3rd.

This Month in History: Dr. Rowena Spencer and Her Little Chickens

Despite the resemblance, Dr. Rowena Spencer explains, children are not tiny adults; indeed, ÃÃÂ£Children are like little chickens. They like to know their way around.ÃÃÃ As one of the first women in the country to specialize in pediatric surgery as well as the first woman appointed to the surgical staff at the LSU Medical Center and the first female surgeon in the state of Louisiana, Dr. Spencer proved a wonderful asset to any hospital. Her bedside manner set her apart as a surgeon of unparalleled worth.

Dr. Spencer preferred to take a lighter approach to her smaller patientsÃÃÃ¶being a friend instead of a threat; as a 1960 Times-Picayune article describes, ÃÃÂ£She is not above bribing a youthful patient with a nickel or a piece of candy.ÃÃÃ And when asked in a recent interview about the most satisfying part of her work, she answered, ÃÃÂ£Holding the babies. I love babies more that a mule can kick.ÃÃÃ A forerunner for females in the surgical arena, Dr. Spencer faced some adversity, though she did not appear to dwell on this issue. She persevered to become a respected member of the medical community at a point in history rife with tension over not only the presence of women in the medical field but also African-Americans. At Johns Hopkins University, where she earned her M.D. in 1947, Spencer was in good company. She studied under Dr. Alfred Blalock and his laboratory technician, Vivien Thomas. Thomas, an African-American with little formal education, played an integral role in helping save those suffering from ÃÃÂ£blue baby syndrome.ÃÃÃ Another partner in this discovery was Helen Taussig, founder of the field of pediatric cardiology and first female president of the American Heart Association. The work of Blalock, Thomas, and Taussig on the heart is immortalized in a PBS production, ÃÃÂ£American Experience: Partners of the HeartÃÃÃ(2002), and in a Hollywood production, Something the Lord Made (2004). Dr. Spencer would continue their work on infant patients, making a name for herself as an authority on conjoined twins.

Examples of her work include many articles such as: ÃÃÂ£Parasitic Conjoined Twins: External, Internal, and DetachedÃÃÃ and ÃÃÂ£Congential Heart Defects in Conjoined Twins.ÃÃÃ An autographed copy of her text, Conjoined Twins: Developmental Malformations and Clinical Implications, is available for checkout at the Library. Dr. Spencer has also had the honor of being featured in a publication entitled, Louisiana Women: Their Lives and Times. Her chapter, ÃÃÂ£A Study of Changing Gender Roles in Twentieth-Century Louisiana MedicineÃÃÃ by Bambi L. Ray Cochran, appears alongside essays on Marie Therese Coincoin, Oretha Castle Haley, and many others in a fitting tribute to their contributions. Dr. Spencer recently celebrated her 90th birthday. 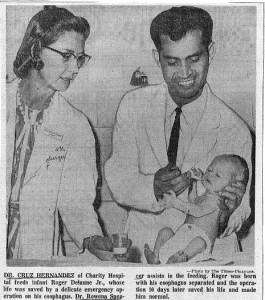 A recent brief interview with her was published on the American Medical Student Association Blog.

The IschÃ© Library has two copiesÂ of her 2003 monograph, Conjoined twins: developmental malformations and clinical implications.