On Wednesday, September 28th, Frank Wagner, M.D., SoM Class of 1961, will present his book “Two Men and a Hospital: the Evolution of Algiers General Hospital Via Henry A. LaRocca, M.D. & Ernest A. Schiro M.D.” in the Moreau Center at the University of Holy Cross.

The book details, in part through personal interviews and illustrations, how Algiers got its first hospital after 200 years of existence due the efforts of two men, including Dr. Henry A. LaRocca, who was part of LSU School of Medicine’s first graduating class in 1933.

The presentation is being hosted by the Blaine S. Kern Library at the University of Holy Cross. For more information, email schaubhut@uhcno.edu.

The portraits are located on the 3rd floor of the library near the faculty publications display, the reference desk, and the printing station.

These portraits are being displayed on a temporary basis. Come visit the library and take a look!

Earlier this month, the National Library of Medicine announced they had finished digitizing the popular and possibly deadly book Shadows from the Walls of Death:Â Facts and Inferences Prefacing a Book of Specimens of Arsenical Wall Papers.Â  It is now available for free to the public at no risk of our lives.

“Shadows from the Walls of Death, printed in 1874 and measuring about 22 by 30 inches, is a noteworthy book for two reasons: its rarity, and the fact that, if you touch it, it might kill you.” (Zawacki, 2018)Â  Dr. Robert M. Kedzie a professor of Chemistry at Michigan State Agricultural college (now MSU) created the book in an attempt to call attention to the dangers of arsenical pigments that were extremely popular in wallpaper at the time.Â  The book contains 84 samples of wallpaper colored with arsenical pigment (especially the vivid green colors Scheel’s Green or Paris Green) which he legally purchased from leading wallpaper dealers all over Michigan.Â  At the time, it was known that arsenic was poisonous when eaten but no one knew that the pigment would shed microscopic dust that when inhaled or ingested would slowly poison the inhabitants of the home.Â Â Dr. Kedzie created 100 copies of Shadows from the Walls of Death and sent them to public libraries across the state – only 4 are known to exist currently.Â Â The other three surviving copies are located at the University of Michigan, Michigan State University, and Harvard University. (Take a look at this great article from Atlas Obscura in 2018.) 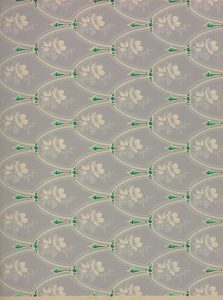 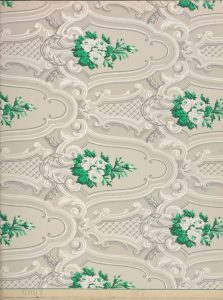 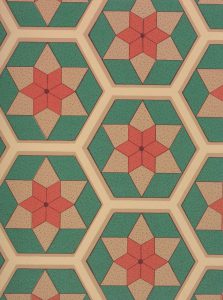 In addition to the fascinating subject matter of this book, it is interesting to note the procedures the National Library of Medicine had to follow in order to digitize the content. NLM worked withÂ NIH Department of Occupational Health and Safety (DOHS) and using equipment at the Smithsonian Libraries, developed a workflow that protected the library personnel and the book during the digitization process.Â  The process and more on the history of arsenic-pigments are described in a three part post in NLM’s blog, Circulating Now: From the Historical Collections of the National Library of Medicine. (Part 1, Part 2, Part 3) 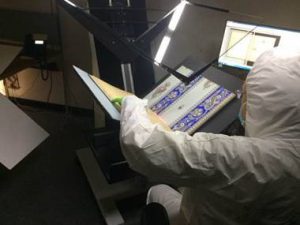 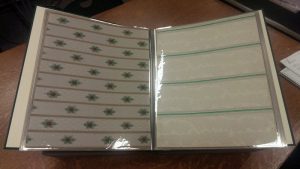 Today officially marks New Orleans’ 300th year. The actual founding date is a bit murky but this is the date picked by the city for this anniversary kickoff!

Every Necessary Care and Attention: George Washington and Medicine 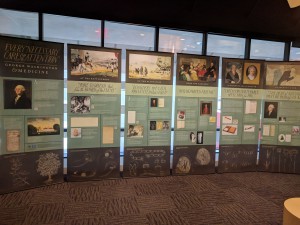 LSUHealth – New Orleans Libraries is proud to present Every Necessary Care and Attention: George Washington and Medicine. The display includes six banners from the National Library Medicine as well as local articles, books, and archival material. The display will be at IschÃ© Library November 13 – Dec 1 and the Dental Library Dec 4 – Dec 21. 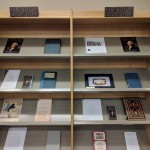 Happy 70th to the CDC

We’re just over a month late, but July 1 was the anniversary for the founding of the Centers for Disease Control. The Center was founded in 1946 from the Malaria Control in War Areas, a program within the U.S. Public Health Service. Enjoy this timeline of their history.

Blast from the Past: IBM punched card The IschÃ© Circulation Staff found an old IBM punched card in a book this morning. The card was for a medical student who graduated in 1969. Now if we only knew what it was used for…registering for classes, or getting a student ID, or taking a test, or ??? The IschÃ© Library has created a mini-collection highlighting the History of Louisiana Medicine. This collection is located on the 3rd floor near the copy machine and is available for checkout. Yale University and the National Endowment for the Humanities have indexed the 170,000 photos created by the US Farm Security Administration and the Office of War Information. All photos were created from 1935 through 1945. Photogrammar organizes the photos so they are searchable via map location, photographer, classification tags (medicine and health for instance), and eventually by treemap, metadata dashboard and colorspace.

Here’s a quick timeline of the various hospitals grouped together as New Orleans Charity Hospital condensed from John Salvaggio’s History of Charity Hospital (available in print in the IschÃ© Library) with additions since its 1992 publication.

The first Charity Hospital was the provisional Ursuline Convent at Bienville and Chartres in 1736 and was called L’Hospital des Pauvres de la CharitÃ© or Hospital of St. John.

The fourth hospital opened in 1815 at State House Square (Canal, Common, Philippa and Baronne) or roughly the location of the Roosevelt Hotel.

The fifth hospital was completed in 1833 and was designed to house 400 – 550 patients. The Daughters of Charity took over the administration of the hospital in 1834.Â  A photo of this location from the 1921 resides in the Library Commons.

The sixth hospital (Big Charity) opened its doors in 1939 and closed in the aftermath of Hurricane Katrina in 2005.

The seventh hospital, the Interim LSU Hospital, functioned from 2006 through 2015.

University Medical Center New Orleans, which opened on August 1st,Â  is the 8th hospital in a direct line from that first hospital over 275 years ago.

Thanks to Circulating Now, NLM’s historical blog, I learned about the Story of Wendy Hill, created by the US Public Health Service in 1949.

It Came From the Stacks

In honor of everyone using their time this summer to study for their board exams, this month’s “It Came From the Stacks” post is about a board review text. Â However, you might not want to use it for your boards as it was published 107 years ago.

Underwood & Gabell’s Aids to Dental Surgery is one volume in their “Student’s aids series.” Â The book is small and as the author states in his preface, “condense(s) into a concise form that department of the science of dental surgery which is capable of such treatment.” Â Underwood states that the books concentrates on matters which are likely to be included on examinations. Â “If the book smooths the path of any of the large body of dental students, with whose education and welfare my daily work has been and is so largely concerned, I shall feel that its object has been accomplished.”

Within this slim, 126 page book, the authors cover the breadth of dental science including bacteriology, hygiene, injuries and illnesses of the pulp, periosteum, mucous membrane, and jaws, extraction of teeth, and diseases arising from diseases of the teeth and gums. LSUHSC-NO Libraries is lucky enough to hold one of only 12 copies of this work in the world. Â If youâd like to come take a look at this book or any of our more recent board review materials, pleaseÂ contact usÂ or stop in to see us.

Tags: board reviews, History, Old_&_Rare Books | Dental Library, Dentistry, It came from the stacks | Permalink | Comments Off on It Came From the Stacks | Posted Friday, July 11, 2014 by Schiavo, Julie

“Richard III, uncle of Elizabeth of York, great uncle of Henry VIII by Lisby in House of York, List of English monarchs, Richard III of England on Fotopedia – Images for Humanity ” by lisby1 is licensed under CC BY 2.0

Richard III reigned as King of England from 1483 until he was killed at the Battle of Bosworth Field in 1485, thus closing the final chapter of the decades-long Wars of the Roses and ushering in the age of the Tudors. He is one of more infamous monarchs in British history, with opinions ranging from him as the hunchback usurper who had his nephews murdered as popularized by Shakespeare, to that of a trustworthy person who was simply caught up in the battle for control of the English crown.* Aside from his interest to scholars and drama enthusiasts, we are finding more and more about Richard III the man and his medical conditions as a result of the discovery and continuing analysis of his remains.

As a defeated monarch, Richard III was not treated to a royal burial after his death. Rumors persisted throughout the centuries as to the fate of his body, and, incredibly, remains discovered during an archaeological dig under a car park in the city of Leicester and subsequent DNA analysis confirmed that Richard III had been found.

One of the most recent discoveries in the ongoing analysis of the remains affects the portrayal of his being a hunchback as described in Shakespeare’s Richard III. An article published in the May 31, 2014, issue of Lancet by Appleby, et al, reports that Richard suffered from adolescent idiopathic scoliosis, but not to such an extent to cause him to appear as the physically deformed monster of the play. According to the analysis, his mobility would not have been affected by the condition, and a clever tailor could even have compensated for any noticeable traces of it in his appearance.

For more information about Richard III, discovery of his remains, and the continuing analysis, please see:

*Full disclosure: the author of this post studied the pardons granted during the reign of Richard III and tends to take a sympathetic view of his legacy.

The National Library of Medicine houses the Michael Zwerdling Nursing Postcard Collection of nearly 2500 postcards, “published in the United States and internationally, depicting the nursing profession, the social history of nursing, the perception of nursing in various cultures, the role of military nurses, and other related themes.” The cards date from between 1893 and 2002. Approximately 600 of the postcardsÂ have been digitized by the ImagesÂ from the History of Medicine section of the History of Medicine Division of NLM. It came from the stacks

Our first book is a classic of dentistry from the Dental Library’s Old and Rare Collection. Â This over sized book, published in 1844, is by Paul B Goddard and is titled The Anatomy, Physiology and Pathology of the Human Teeth; with the most approved methods of treatment, including operations, and the method of making and setting artifical teeth; with thirty plates, also known as “Goddard on the Teeth”. Goddard on the Teeth

When “Goodard on the Teeth” was published, it was described in a review in American Journal of Medical Sciences as a “practical treatment on the subject of the teeth”. Â It is praised by the reviewer: “… the work is got up in the handsomest manner. Â The plates are indeed the best specimens of lithography we have seen executed in this country.” Â This book contains some remarkable images head and neck anatomy, microscopic structure of teeth. dental equipment, a four step pictorial description of extracting teeth using a key, and various forms of artificial teeth and plates, among others. This is a very interesting book that is exemplary of the beginnings of modern dentistry. Â If you would like to take a look at it in person, please contact the Dental LibraryÂ and make arrangements to come see it. Â We’d love to share our old and rare treasures with you.