This Month in History: Dr. Rowena Spencer and Her Little Chickens

Despite the resemblance, Dr. Rowena Spencer explains, children are not tiny adults; indeed, ÃÃÂ£Children are like little chickens. They like to know their way around.ÃÃÃ As one of the first women in the country to specialize in pediatric surgery as well as the first woman appointed to the surgical staff at the LSU Medical Center and the first female surgeon in the state of Louisiana, Dr. Spencer proved a wonderful asset to any hospital. Her bedside manner set her apart as a surgeon of unparalleled worth.

Dr. Spencer preferred to take a lighter approach to her smaller patientsÃÃÃ¶being a friend instead of a threat; as a 1960 Times-Picayune article describes, ÃÃÂ£She is not above bribing a youthful patient with a nickel or a piece of candy.ÃÃÃ And when asked in a recent interview about the most satisfying part of her work, she answered, ÃÃÂ£Holding the babies. I love babies more that a mule can kick.ÃÃÃ A forerunner for females in the surgical arena, Dr. Spencer faced some adversity, though she did not appear to dwell on this issue. She persevered to become a respected member of the medical community at a point in history rife with tension over not only the presence of women in the medical field but also African-Americans. At Johns Hopkins University, where she earned her M.D. in 1947, Spencer was in good company. She studied under Dr. Alfred Blalock and his laboratory technician, Vivien Thomas. Thomas, an African-American with little formal education, played an integral role in helping save those suffering from ÃÃÂ£blue baby syndrome.ÃÃÃ Another partner in this discovery was Helen Taussig, founder of the field of pediatric cardiology and first female president of the American Heart Association. The work of Blalock, Thomas, and Taussig on the heart is immortalized in a PBS production, ÃÃÂ£American Experience: Partners of the HeartÃÃÃ(2002), and in a Hollywood production, Something the Lord Made (2004). Dr. Spencer would continue their work on infant patients, making a name for herself as an authority on conjoined twins.

Examples of her work include many articles such as: ÃÃÂ£Parasitic Conjoined Twins: External, Internal, and DetachedÃÃÃ and ÃÃÂ£Congential Heart Defects in Conjoined Twins.ÃÃÃ An autographed copy of her text, Conjoined Twins: Developmental Malformations and Clinical Implications, is available for checkout at the Library. Dr. Spencer has also had the honor of being featured in a publication entitled, Louisiana Women: Their Lives and Times. Her chapter, ÃÃÂ£A Study of Changing Gender Roles in Twentieth-Century Louisiana MedicineÃÃÃ by Bambi L. Ray Cochran, appears alongside essays on Marie Therese Coincoin, Oretha Castle Haley, and many others in a fitting tribute to their contributions. Dr. Spencer recently celebrated her 90th birthday.

This Month in History: Pay No Attention to the Doctor Behind the Iron Curtain

A young, bespectacled version of the Wizard of Oz, Dr. Frank N. Low, lived up to the great and powerful legacy as a member of LSUMCÃÃÃs anatomy faculty, venturing behind the Iron Curtain in 1958. His travels came at a time of international tension, but in the name of science, Dr. LowÃÃÃs survey of electron microscope usage in laboratories across Europe proved invaluable in transcending the iron divide and promoting cross-cultural cooperation. 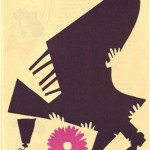 Remarking on the ÃÃÂ£exoticÃÃÃ subway of Moscow, the ÃÃÂ£finely developedÃÃÃ Russian sense of humor, and the popularity of the play, ÃÃÂ£Klop” the Bedbug, in his interview with the Times-Picayune, Dr. Low appears to have enjoyed his surroundings overseas. He even brought home an object known as the ÃÃÂ£Tartar MenaceÃÃÃ that would turn out not only to be lucky for Low, but also for his research assistant, a previous ÃÃÂ£Glimpse of the PastÃÃÃ honoree, Dr. Marilyn Zimny, who upon receipt of the figurine received news that she had been awarded a research grant for $28,000. The ÃÃÂ£Tartar MenaceÃÃÃ appears to refer either to a group of indigenous Mongol peoples called the Tatars or Tartars, or the Greek myth of Tartarus, a section of the underworld. Despite its violent etymology, the figurine kept Dr. Low safe from even a stubbed toe on his journey.

And lucky we are that it did, for Dr. Frank N. LowÃÃÃs contributions to the scientific world were momentous. As of a 1953 article, ÃÃÂ£Dr. LowÃÃÃs study provide[d] proof of the existence of a complete covering of the tiny blood vessels in the lung. 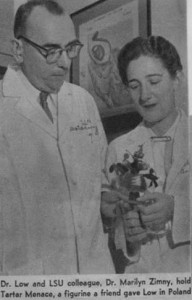 The presence of this covering, medically known as a pulmonary epithelium has long been in doubt. The significance of [his] discovery is that it is an explanation of how air is excluded from the lung tissue, a destructive process. This is why lung surgery is so cautiously practiced.ÃÃÃ

His triumphs also include authoring a renowned text, Electron Microscope: Atlas of Normal and Leukemic Human Blood, acquiring an electron microscope for LSUMC, and pioneering scanning electron microscopy (SEM) and freeze-etch/freeze-fracture technology. His impressive career culminated in his later life with the establishment of the Annual Dr. Frank N. Low Research Day at the University of North Dakota. He returned to LSU at the end of his career to work under Dr. Zimny in the anatomy department until his death in 1998. This memorial article shows how truly respected and loved he was. Now, if only we could find his ÃÃÂ£Tartar Menace!ÃÃÃ

Ever wondered how to catch a lizard? You might think to consult wikiHow or you might look up an instructional video on YouTube. Consulting our Digital Collection of newspaper clippings, however, would reveal quite an interesting portrait of a rugged, LSU Indiana Jones in pursuit of a rare treasure: the live-birthing lizard.

In 1953, the Times-Picayune ran an article on one Dr. George W. D. Hamlett, faculty of the LSU Medical School Department of Anatomy, whose research practices involved catching his subjects in the American Southwest rather than in a lab. Nets are all well and good for the casual lizard hunter, but Dr. HamlettÃÃÃs methods included an elaborate system of hammer, chisel, stick noose, and rifle. 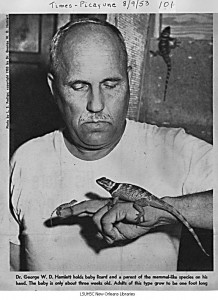 In order to capture the illusive live-birthing female lizard, he donned the traditional gear: khakis, hiking boots, and traded a fedora for a sun hat; armoring himself thus, he chiseled lizards out of rock formations and sought the mammal-like desert lizard among the trees. His interest in these lizards lay in their ability to produce young not through external development in an egg, but within the female of the species, an oddity for the reptile. Though Dr. Hamlett lacked the Indiana Jones bullwhip and the characteristic fear of snakes, his adventures were nevertheless harrowing.

The character of Dr. Jones is perhaps based on Sir Arthur Conan DoyleÃÃÃs character, Professor Challenger (a figure in turn based on his own Professor Sir William Rutherford) who is famous for having combined several areas of study such as archaeology, anthropology, and zoology in the pursuit of a totalizing knowledgeÃÃÃ¶ÃÃÂ£Science seeks knowledge. Let knowledge lead us where it will, we still must seek it. To know once for all what we are, why we are, where we are, is that not in itself the greatest of all human aspirations?ÃÃÂ£(When the World Screamed). In the same way, Dr. HamlettÃÃÃs study of embryology continued on many divergent paths as he explored the complexities of the long-tongued bat, the badger, the armadillo, the cat, the coyote, and the American monkey, finally culminating in his study of humans.?Ã¡ Some of his published works, ÃÃÂ£Embryology of the Molossoid Bat,ÃÃÃ ÃÃÂ£Some Notes on Embryological Technique,ÃÃÃ and ÃÃÂ£Human Twinning in the United StatesÃÃÃ can be accessed through PubMed.

Though the similarities between Dr. Hamlett and Dr. Jones may not be many, there is an air of adventure to every quest for knowledge. Why can the scientist not leap across cliff faces and come to the rescue every now and then? But please be aware that there are no catacombs beneath this libraryÃÃÃs floorÃÃÃ¶youÃÃÃll have to go to Venice for that. 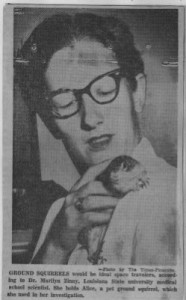 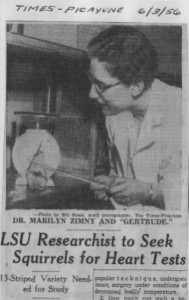